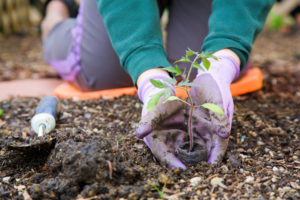 I’ve made a few half-hearted attempts at gardening over the years, but I can’t say any of them have been very successful. I prefer to start with something that has already flowered, so all I have to do is water it and make sure it gets sun. (Even this has proven to be too much responsibility for me.) I can remember saving apple seeds as a kid and planting them in my backyard, expecting to see a full grown apple tree within a few weeks. After watering one seed for a few days and not seeing any progress, I quickly abandoned that seed and started with another.

In John 4, Jesus lectures His disciples on faithfully doing the work of His Father, saying, “Already the one who reaps is receiving wages and gathering fruit for eternal life, so that the sower and reaper may rejoice together. For here the saying holds true, ‘One sows and another reaps.'” This passage gave me reason for pause last time I read it. I gave up on my seeds after a few days, but what if I had watered that apple seed every day of my life and never got to eat the fruit? What if I never saw the fruit of my faithfulness? Frustrating though that may be, I would have to be ok with it. Because you see, it’s not about the fruit; it’s about the faithfulness. Paul says, “I planted, Apollos watered, but God gave the growth. So neither he who plants nor he who waters is anything, but only God who gives the growth.” I cannot make fruit grow. I can, and must, be faithful in my planting, watering, and tending, but the rest is up to God.

At Pathway to Hope, we spend our days sowing seeds. Sometimes we have the opportunities to water these seeds for a month, sometimes a year, and sometimes five years. Sometimes we see fruit, sometimes we don’t. Sometimes we don’t even get the chance to water these seeds at all. There are times that a young woman calls the center, asking if we can give her an abortion or help her get one. We might have 5 seconds or 5 minutes to talk to her before she hangs up. More often than not, we never talk to her again. Talk about sowing seeds without ever knowing if there’s any fruit. This can be a gut-wrenching experience, knowing that this is literally a matter of life and death. What does faithfulness look like here? I think faithfulness looks like preparing ourselves as best we can to have these conversations over the phone with a frightened, panicked young woman who sees no other way out of her crisis. It means saying the hard things even when it’s uncomfortable because a life is at stake. It means obeying God by speaking the truth with courage and boldness. Despite the frustration, the sadness, and the pain of these conversations, we will continue to answer these calls, have these hard conversation, and do the work faithfully because that is what God calls us to.

A few weeks ago, God in His goodness, gave us an opportunity to see some of the fruit. I answered the phone on a Wednesday afternoon to a woman who immediately started gushing, “I just really needed to call you guys because I talked to you about 4 months ago after I had just found out I was pregnant. My doctor told me that I was too old (I’m 41) to have a baby, so I should have an abortion. I was scared, but I thought that’s what I needed to do, so I called you guys and asked you to help me get one. You told me that you didn’t do abortions, but you wanted to help me in whatever ways you could. I remember that you told me my baby’s heart was beating!” I was the one who had answered her phone call 4 months previously, and I remember that call very distinctly. She was very quiet on the other end of the phone, and didn’t respond to much that I said. I talked to her for a few minutes about the development of the baby and the ways we could help her with an adoption plan, or the resources she needs to take care of a baby. I told her she was carrying another human inside her, and we would do whatever it takes to make sure that baby thrives. She hung up soon after that, and all I could do was pray. On the first phone call, she hardly said anything, but this time, she was so eager and excited. “I decided like 5 minutes after I hung up that I was going to keep the baby!” she said. “I was too scared to ask for help or anything before, but now I’m ready.” Last week, this mom started a Bible study with one of our dedicated volunteers. She’ll be earning a brand new crib and mattress in preparation for her new baby, coming in August. We praise God that he sent this woman to us instead of to Planned Parenthood. We thank Him for producing the fruit from our humble seeds. And we thank Him for giving us the encouragement of seeing some of the fruit of our labors.